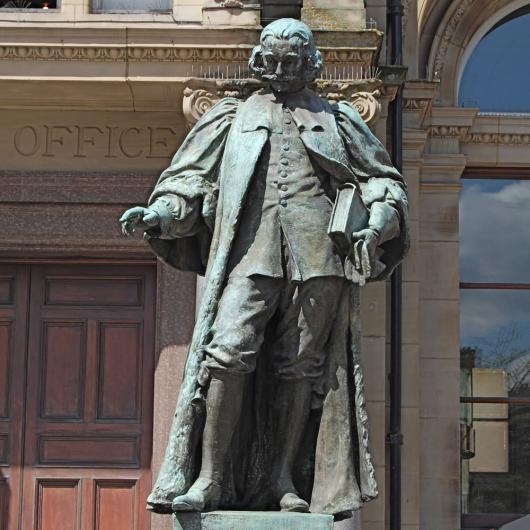 Written by who?
Perhaps by you!

Cloth merchant, city benefactor and cat lover, John Harrison (1579-1656) was one of the leading citizens of 17th-century Leeds. Along with six other prominent townsmen, he bought the manorial rights to the city from the Crown shortly after Leeds obtained its first charter from Charles I in 1626. He built a large house and orchard on Briggate, opposite Boar Lane, noted for its numerous 'Holes or Passages cut in the Doors and Ceilings, for the free passage of Cats'.

Now this lively character from Leeds' past wants to tell us a thing or two - but what does he have to say? Are you the one to tell us?

Submit a short monologue (maximum 400 words) from the perspective of the statue. Our expert judging panel will be looking for originality, factual accuracy and entertainment value, so keep this in mind when writing.

The winning piece will be recorded by a well-known actor associated with Leeds and included as part of Talking Statues, ready to chat later in the autumn. The statue will talk for a whole year! Winners will also be invited along to their monoogue recording and receive a copy of the final recorded script to keep.

The competition is open to all those over the age of 18.