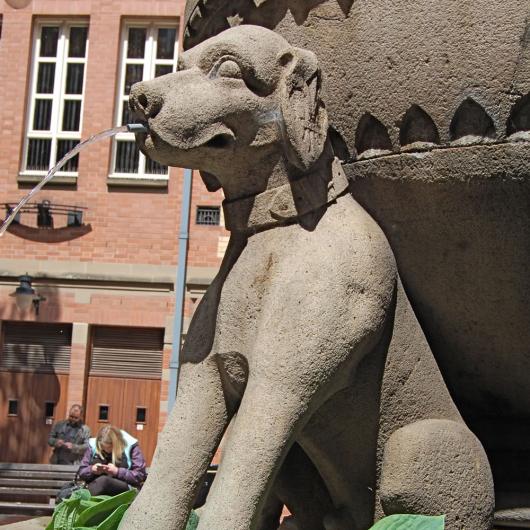 Written by who?
Perhaps by you!

In Trevelyan Square, a noble Talbot - a hunting hound - stands alongside three others, supporting a grand stone fountain built for Castle Carr, a huge mock-medieval house near Halifax. Lost for decades after the house fell into ruins, the fountain eventually reappeared in a stonemason's yard in the 1990s!

This hound has seen plenty in its time, from welcoming guests to Castle Carr to its adventures during the years it vanished. What it wants is a voice. But what stories does it have to share? Are you the one to tell us?

The winning entry of the Young People's writing competition will be recorded by a well-known actor associated with Leeds, before joining the other Talking Statues. The Talbot Hound will begin to speak in autumn 2016.

Submit your monologue (maximum 400 words) with the subject heading 'Talbot Hound Competition Entry to competition@talkingstatues.co.uk by Monday 19th September 2016, along with your date of birth.

Our expert judging panel will be looking for originality, factual accuracy and entertainment value, so keep this in mind when writing!

The winning pieces will be recorded by well-known actors and included as part of Talking Statues Leeds, ready to chat later in the autumn. They'll talk for a whole year! Winners will also be invited along to their monologue recording and receive a copy of the final recorded script to keep.

The competition is open to all young people under the age of 18.